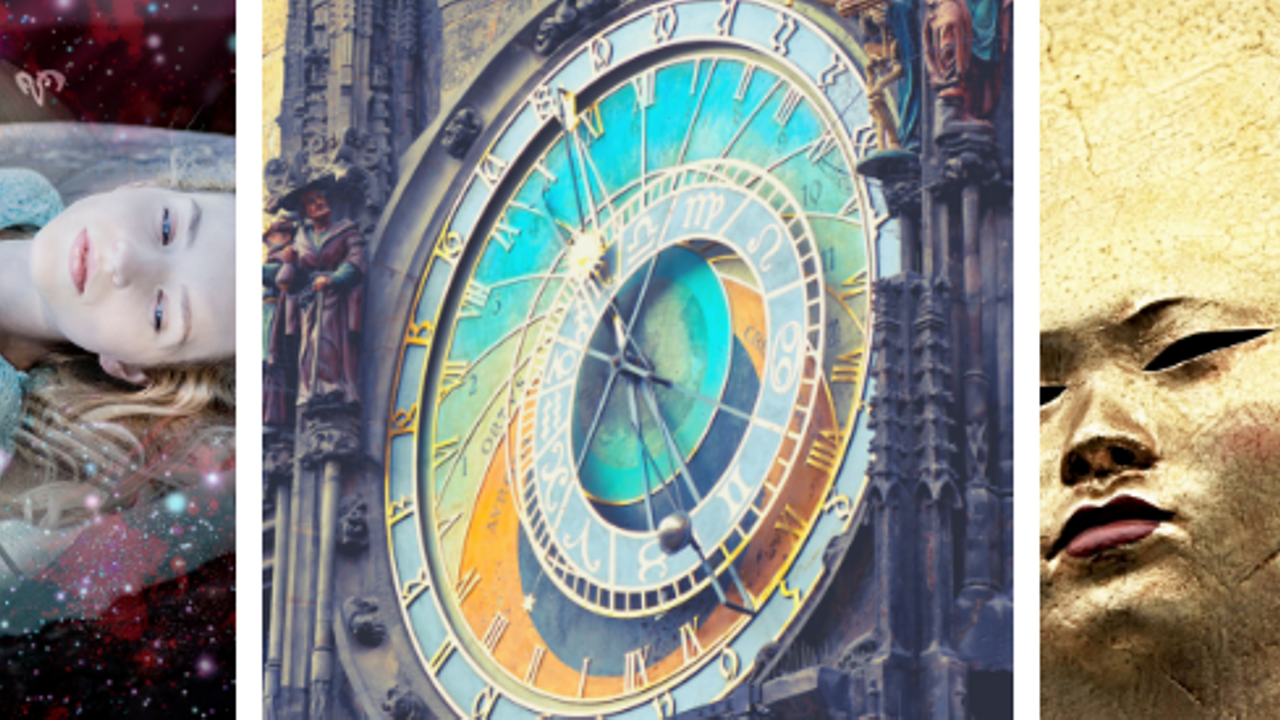 Welcome to the New Moon in Virgo on 30th August that strikes:

As always, when it comes to writing the blog for the current moon cycle, I think about the things that have been happening leading up to it, and my feelings about it all, I tune in with me first.

I then read what other Astrologers say, which acts as a mirror by seeing that we all have an individual take. That has the effect of cementing the unique astrotarot channelled message that comes through me.

This month, is no exception.

I’m currently in the Spanish region of Granada, in-between the two worlds of The AstroTarotFlamenco Retreat which centred around the story of Peresphone and the pomegranate and my best friend’s wedding.

Let's give you the low down on Persephone and the Pomegranate first:

Persephone (The High Priestess) was walking in a meadow one day and she saw the beautiful narcissus flower.

As she reached down to pick the flower, the earth split open, and Hades, the Lord of the Underworld (Death) emerged.

Hades then took Persephone, willingly or otherwise, in a Spiral Dance into the shadows of the underworld.

Demeter (The Empress) grieved her daughter so much that all life on earth started to die and earth wouldn't bear fruit anymore.

This forced Zeus (The Emperor) to send the god Hermes (The Magician) to bring Persephone back to her mother.

However, it turned out Persephone had eaten seeds of pomegranate in the underworld, which would bind her to Hades and the Underworld so a bargain was struck between Demeter and Hades, that she would spend Spring and Summer with her and Autumn and Winter with Hades.

Through this Persephone learned the power of transformation; death, rebirth, dark to light, lost to found, chaos to clarity, fear to transcendence.

The Kabbalah, is an esoteric doctrine established within the circle of the Sephardi mystic scholars (Sephardis being the Jews of Spanish origin) in the 13th Century.

Persecuted for many years,the Sephardi Jews were deprived of their belongings and their culture. Their identity was constantly questioned and their contribution to history systematically erased.

Since their books were burned, concealing mystical thought within other objects was, albeit unusually, a way to ensure its survival.

For those who know and who possess the right key for interpretation and the right sensitivity one single symbolic cue - even in pictorial form (such as tarot) - can open wide a world of analogies and implications.

This bridge is also held together by things such as the pomegranate.

The pomegranate itself is a symbol of potential, fertility, creativity and “indisoluble marriage”

Interestingly it was when I lived here in Granada that I became aware that I could not, nor was there one seed of me that wanted to dissolve my marriage, just like what happened to Persephone.

The pomegranate is a popular symbol in Granada. The word Granada in Spanish actually means pomegranate. Some believe the city was named after the fruit. The word is said to come from the Latin granum(seed), though others say it derives from Arabic. When Queen Isabella and King Ferdinand conquered the last stronghold of the Muslims in Granada in 1492, they considered it so significant an event that a pomegranate was added to the province’s coat of arms.

I am here for two reasons - the one above, and the one below (just like Persephone!)

My best friend’s wedding happens the day after this moon ( The germination of her pomegranate seed). Interestingly she has a Virgo ascendent, Virgo is the virgin and your ascendent is the face you put on to the world, her face is now changing from virgin to as she becomes Mrs Cacho Marquez.

It’s a pretty strong moon for me too, because I have Mercury (the planet that rules Virgo) in Virgo itself, and in the fifth house of creativity. It means a new start for me around the way I think and communicate my creativity. This message I feel far more connected to than when I read the general astrology blogs.

Which tells me in true diligent Virgo style today’s the day to help you unlock what this Moon means uniquely for you!

To follow this part you will need to visit www.astro.com with your time, date and place of birth.

If you don’t know your time you can put “unknown” into the system, but it’s better to know it if you can. Once you have done that it will generate you a chart, once you have your chart you then go to extended horoscopes and click transits (with the date of this Moon)

It will then generate you a transit chart like so: 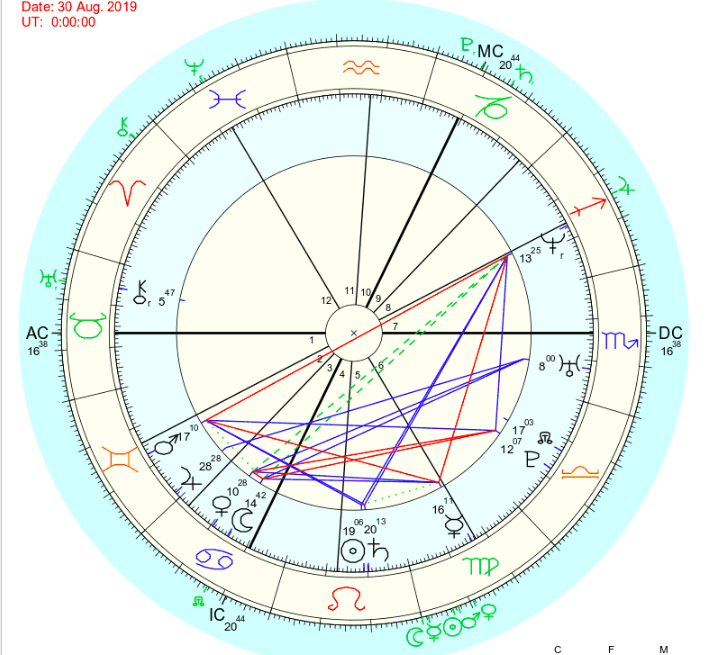 From here it is easy to see where the energy of this New Moon is activating in your chart (life).

The planets around the outside of the zodiac wheel are the transits ( placement of the planets on the day you have chosen) and inside is where they were when you were born.

Around the central sphere you see numbers starting at the position of 9 O clock with a 1 and working round anti - clockwise, these are the houses (part of your life the energy is being infused with)

Here is a brief rundown of the houses for you:

1 - Self (ascendant is found here as AC)

So you can see the majority of the action is bunched in one area around the New Moon and that is why a New Moon is so powerful, and that it activates different parts of the chart for a lot of us.

For instance, for my friend that is getting married,  her first house (ascendant) is being activated by the new moon - her face to the world (ascendant) is changing from miss to Mrs.

For me it’s another birth on how to communicate my creativity clearly and serve it with diligence.

For you? Look up the house it is activating in your chart.

Astrology is a deep and complex subject and this is just a snippet. I am resisting the urge to give you all the info I can, because that has been one of the challenges with this very placement in my chart.

The more you get to know about astrology, tarot, the kabbalah and esoteric symbolic language the more it will open up for you, but this is a never-ending journey to be enjoyed at a meandering pace.

It may have been that I didn’t really resonate with any of the interpretations of this new moon for me when I read the blogs, but when one of them (Darkstar Astrology) started talking symbolically rather than in sentences that are skewed by personal filters I got it. For instance:

The Astrology King interprets this moon with a very personal relational flavour, maybe this Moon is in his seventh house!

Darkstar Astrology interprets this moon with a work flavour, maybe this moon is in her sixth!

Forever Conscious says it’s a powerful new rebirth time for a project or any area of your life that is overplayed and outworn, if you open up to inspiration, now that is more encompassing, but if you do the steps I showed you above you’ll know how to pinpoint the area for you.

These are the three I read monthly, and yes the three that powerfully mirror back to me the need to tune into my own message, but that doesn’t mean I think they are not worth reading, obviously as I wouldn’t read them every month - I am aware that to write something accurate for every single person is impossible.

When we tune into the energy of the universe and channel we can only dish out the flavour of one of your ingredients and when you put that into your own dish with your own recipe something different will come out.

Words are weak when it comes to trying to communicate astronomical truth.

But symbolic language is something else entirely.

Let’s go back to Darkstar - she never lets me down BECAUSE she includes the symbolical, so even if her interpretation doesn’t do it for me as soon as I scroll down to her symbolical situation. BANG! I get it!

So yes this month, I’m not feeling it and then I get to her symbolical section and come across this…

"The tarot card associated with this decan is the 8 of pentacles. This is a card of commitment and craftsmanship. Karmically this will be a life where one pays a lot of attention to detail and completing tasks. Education and scholarships are important and it is about giving something back. In this life, however, the native must learn:you may be working hard to build a secure future for you and your partner or family. Make sure you remember to go home regularly and make some time for fun and social activities. The type of person you are leaves you exposed and vulnerable to becoming a workaholic. If you let this happen, then it may very well destroy your lovely relationship. You must work hard at striking the right balance. (This life) you can have both you know!” 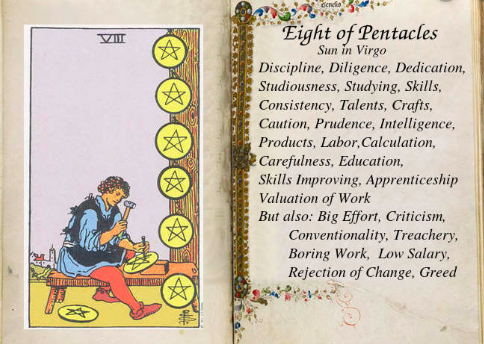 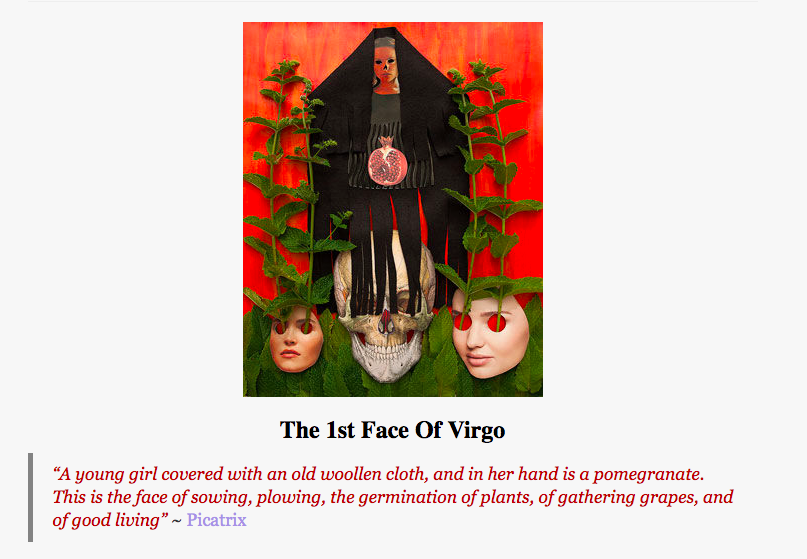 This has been my journey here in Granada.

Witnessing myself and other fair maidens through the journey of their pomegranate tree of life activation so they may germinate the good life.

When you know symbology, everything makes sense and there is no judgment on the journey.

Virgo can be nitpicky and judgmental so if you are feeling like you have been criticised, shamed and blamed or you are doing it to yourself right now this can be a shadow side effect of the perfectionist side of Virgo Moon, but once you are in touch with the symbology rather than the words the greater purpose is understood and you are released from the underworld to find your spring.

If reading this blog has blown your mind and helped you make sense of what is going on for you right now and you would like to learn more the best way is through my signature program:

The Transformational Truth of Tarot, which I currently have a couple of spaces available for, to apply click the button below:

Or alternatively get on the waiting list for May's AstroTarotFlamenco Goddess in Granada Retreat here:

Have a wonderful New Moon and I look forward to seeing you on the other side!