New Moon in Taurus 23rd April - The Mother of all "Maleficents"

On April 23rd @ 3:25am BST the Sun meets the Moon in Taurus, seeding the spark of the divine gifted by Aries into the Earth.

Planting the spark of the divine into the Earth sounds wonderful doesn’t it?

And I do believe this is more possible now than I have ever seen in my lifetime.

Only 9% of Brits want the world to go back to "normal" after lockdown, so surely that tells us something?

The Moon LOVES to be in Taurus, more than any other zodiac sign. It feels at home in the Earth Mother.

The Moon loves to grow things, which is why farmers plant by the rhythms of the Moon.

A silver lining product so supported by our current Covid climate.

But birthing a new world is no mean feat and so it comes as no surprise that this is the third somewhat challenging Moon in a row and as I said in the last one:

Astrological skies aren’t meant to be a glass ceiling of an invisible prison.

Astrology is the bigger picture, a mix of the divine to help us gain traction for our evolution, so with what I am about to say, pose the question:

“How do I evolve through this?”

When the Moon is New the Sun has come round to greet it.

It is a meeting of minds, our consciousness and unconsciousness. A momentary revelation, an enlightening rebirth, the beginning of a new life.

With Taurus being the Earth Mother, we are birthing a new world, but Uranus has also come into the labour ward.

The purpose of Uranus is also to birth a whole new world.

But it does it in a way that unsettles the security conscious Bull.

Uranus rules "The Fool", the first card in the Tarot. Representing the newborn child, a visionary that brings forth the divine’s vision like “there’s method in the madness”!

The Fool is a real wild child, bringing chaos and upheaval into the once steady well ordered comfortable Taurean’s life, which raises a red flag to a bull.

We have a rebel in the labour ward whilst the Mother is trying to birth, not only that but Saturn is squaring off to the labour room party.

Uranus wants the freedom to experience life andSaturn is the elder who restricts and commands order, responsibility and respect (lockdown).

In mythology Saturn ate his children, and is the archenemy of Uranus.

Saturn also sounds like “Satan” and is called the major “malefic”.

Saturn is the fallen angel, the old, aggrieved, bitter, jealous, vengeful forgotten ex (also the shadow side of Taurus). You can see this archetype in the fairytale “Maleficent” the evil wicked witch that curses the newborn, but , thankfully, what we have here is more Disney:

The one where “Maleficent” is not actually evil, but hurt and misunderstood. The newborn is the product of such a hurt so she curses it.

But the child grows to become Maleficent’s saviour because she is open hearted.

This story is one of Taurus (just look at Maleficent's horns). Taurus has a powerful mothering instinct and if it sees this new world as one of love then there is hope.

My husband has a Taurus Moon, when his daughter was born he had this type of experience, which meant he became his daughter’s mother - and a fabulous one at that.

Anything he touches grows with love, plants, food, relationships, this is the epitome of the Taurus moon and the answer to the question.

“How do I evolve through this?”

I am cooking up in my Taurean kitchen a recipe to help you birth a new world of love.

I have a Taurus Ascendant, which means anything wholesome I cook gets served to the public!

In my house the kitchen is Mr Taurean Moon’s room  - he won’t even let me make him a cup of tea!

Since lockdown he has turned the lounge has turned into an allotment! Suits me real fine! He puts the love in the home kitchen, which means I can put even more love into what I am cooking up for you :)... 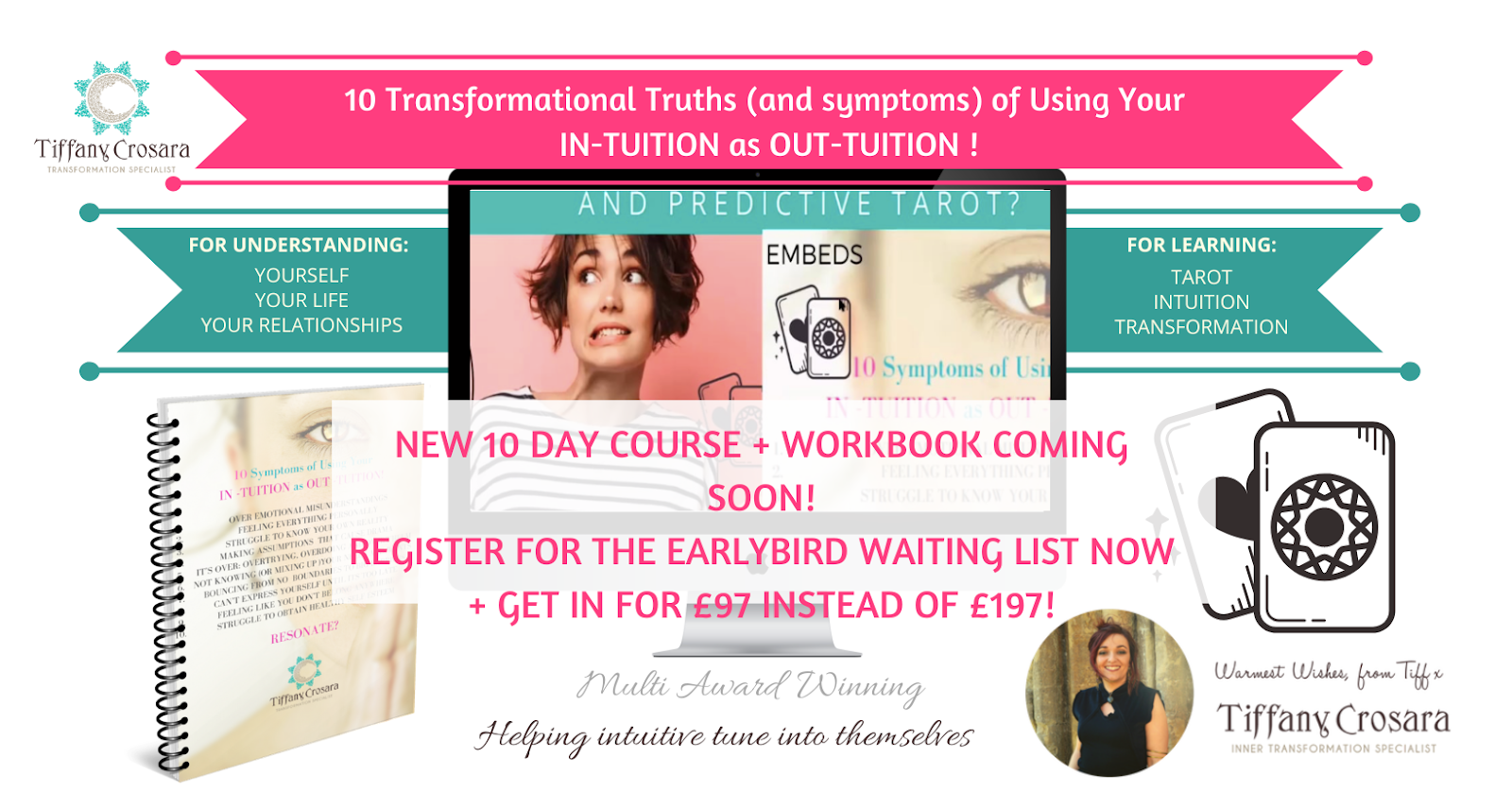 A new 10 day program that will teach you how to use your IN-tuition for the good of your self esteem, communication, and relationships.

If you have been following me lately you’ll have heard me talk about these symptoms. Based on my lifetime study of being intuitive and working with intuitives. I saw common “symptoms” that wreaked havoc with the lives of intuitives and it began to click why.

Fundamentally it comes down to this:

As an intuitive there would have been a time in your childhood that you clocked that your caregivers needs are more important than your  own, from that moment on your ability to read others needs and at the same time suppress your own became second to none. In that sense you are using your "IN"-tuition as“OUT” - tuition.

And as you grow the symptoms grow alongside wreaking havoc in your life and relationships, and like Maleficent...

You end up feeling isolated, wronged, like you don't fit in.

But you can learn how to love differently and birth a new world from the divine spark. The thing as an IN-tuitive you will pride yourself on being loving but if you have any of symptoms then what you have learnt is“OUT” tuition. Which means although you may love someone there will be problems.

Which reminds me of one of my favourite quotes:

“And then I learned the spiritual journey had nothing to do with being nice. It had to do with being real and authentic. Having boundaries. Honouring and respecting my space first, others second. And in this space of self-care, being nice just happened, it flowed… not motivated by fear, but by love.” - Michelle Olak.

We have been brought up by generations of Maleficents. The wounded bringing up wounded, it's nobody's fault, and as hopeless as it might sound, it’s not.

If you look at the birth of the new and allow it to teach you how.

That’s what we will do in our 10 day healing of a symptom a day through implementing and daily Transformative Tarot and Self Care.

Want to birth your new world of love with the magic of transformative Tarot?

Register your interest to get in for £97 instead of £197 and receive INSTANT access to your 10 Symptoms of "OUT"TUITION Ebook and Videoclass!✨