NEW MOON IN TAURUS MAY 11TH: AND BREATHE… BIRTHING THROUGH THE MOTHER WOUND. 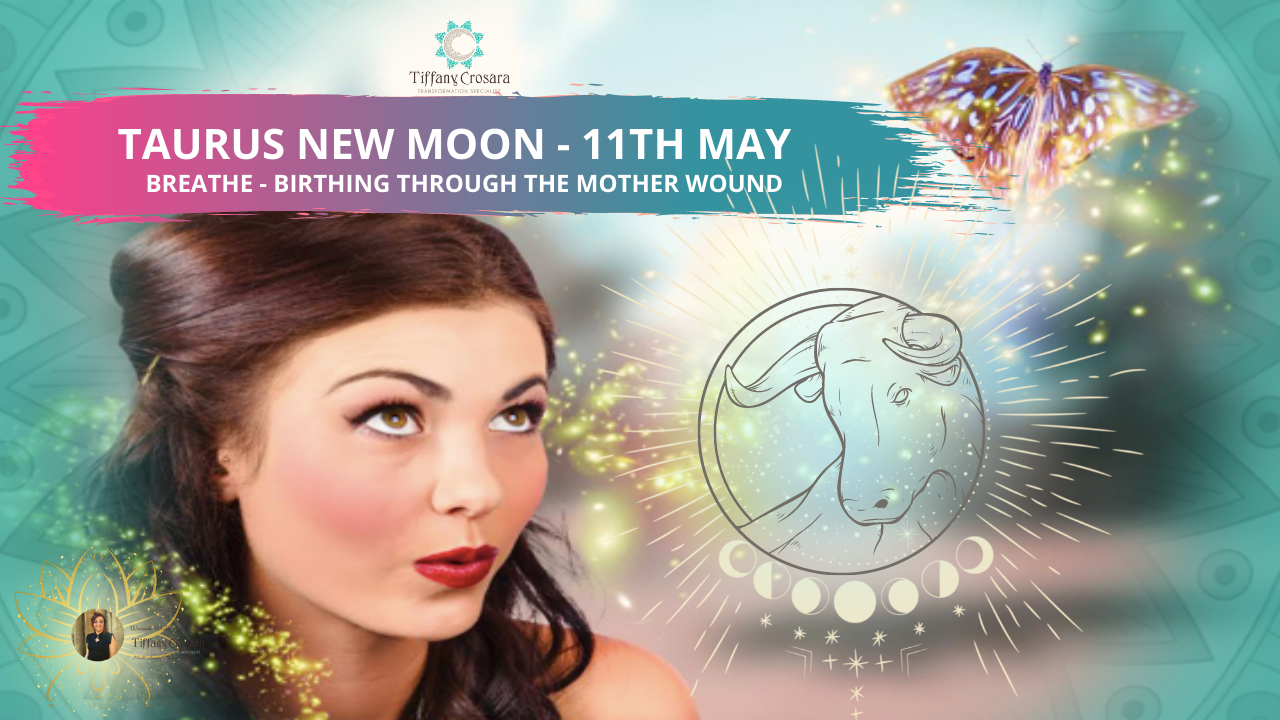 Welcome to the New Moon in Taurus, birthing at 7:59 pm BST on 11th May

It is a GLORIOUS New Moon - and glory doesn’t come without a whole heap of struggle predating it.

Why is it glorious?

In short that makes this Moon an incredible pre dater to the changes we are likely to see manifesting over the next six months after the full moon in a couple of weeks (26th) which kicks of eclipse season in this year of change.

Taurus brings up matters of heart, home, and heritage.

Taurus also stands for our self worth, and the inherited mother wound.

I have lost count with the amount of Tauruses who have had a massive mother wound - but you don’t need to be Taurus to have a mother wound - if you’ve got one it’s likely to be shown this New Moon - and you’ll know about it.

Taurus is the Earth Mother, this is a great Moon to plant a new seed, whether that be literal or symbolical. If it’s symbolical, it will come from the wound, but use it to be the wounded healer, the heartfelt warrior and not the hurtful warrior.

This Moon is the moon where dreams can come true - but it depends on:

Whether you act from a place of the heartfelt warrior or hurtful worrier.

It’s time to put an end to any line of pain, and that comes showing up and shining light, love and consciousness with your wound because it’s those struggles that plant the seeds of glory.

Don't let yourself go unconscious and continue acting from the pain, because that only causes more pain, for yourself, and everyone involved.

Be the healer for yourself and others.

I will even go as far to say this is a miraculous moon.

Things you thought could never happen can and will.

Maybe you can already feel this?

Here’s an example of three miraculous things that are happening in my life this week - all birthing from the mother wound:

On the day of this New Moon the first ever International Intuitives Raising Awareness event starts - it’s a new movement standing for the intuitives that are told they are evil not equal, weird not wonderful, or they should feel shame instead of shine ( born from my mother wound)

11 Intuitive Experts will show up vulnerably with you and share:

Uncannily, it just so happens the next day I'm viewing property with my mum! If you know our story you’d know just how miraculous this is! If you don’t know our story, you will one day.

The day after that I'm on a private 1:2:1 call with Russell Brand!

Hopefully one day I will be able to say “click here to be a part of it!” But for now here’s a clip of Russell speaking about the mother wound:

I’ve been trying to manifest this ever since I started consciously healing my mother wound in 2016.

And I don’t just mean call with ol’ Russ - I mean everything when I say NOW it’s finally happening.

The glory from the struggles, just don’t be a twat a long the way basically!

Come from the heartful warrior not the hurtful worrier, don’t carry the wounding down the line, carry the healing.

In my last blog I revealed 3 of my cards I had been working on (I’m also creating a long awaited Tarot deck) and asked you to choose one of the cards - from there you got a lil mini reading to keep you on track.

It was so popular, I’m going to make it a regular part of my moon blogs.

So I’ve chosen the three that carry the energy of this Moon below.

Let your knowingness guide you.

Whichever one you choose will guide you to a person and a place to help you connect to your internal divine knowingness.

Here we go. The big reveal:

Got number 1? You got The Moon: It's Time to Heal, Dream and Align to a Legacy.

Here we have two Pisces ♓️

Einstein as the Man in the moon 🌝 who once said “do you really believe the Moon isn’t there when you don’t look at it?”

And the spirit of Martin Luther King’s legacy crossing a bridge over the Mississippi Moon River to save child slaves from the cotton fields.

The statue represents “ I have a dream”

When I started this deck I expected it to be far more traditional than it is, with each card I have been asked to unhook more and more.

🌝I used to see The Moon as a feminine card but not really anymore! Here we have two male figures.

😱 That took my head to shift but when it did it blew my mind.

👶 BOTH men stood for raising children with inherent self worth.

“Everybody is a genius. But if you judge a fish by its ability to climb a tree, it will live its whole life believing that it is stupid.”

Sums it up, he was very much about building up the INDIVIDUAL for who they are.

🌝And so this Moon card goes DEEP indeed.

Is it a yes to healing your heritage? Then click here to cross the bridge 🙏💗

Got number 2? The High Preist Time to have some faith.

If I gave you a picture of what The High Priest meant to me it would be a Moon 🌕 rising over Mountains 🏔 as that was when I felt my truest ever connection with him, but where’s the person? 🤷🏽

So I google Taurus spiritual leaders : Pope John Paul II - is he my High Priest? No.

He did a lot of good but he was a typical High Priest in that he condemned others. To me that is what religion does, not spirituality.

So who represents my High Priest?

But Gandhi is Libra, what to do guides?

A quick search shows not a lot of love lost between Gandhi and Italy who said he was too scantily clad to meet with the Pope; he was also deceived by Mussolini.

So here we have the controversy and politics that go hand in hand with religion sadly.

Not the way I want to portray The High Priest I met in the Spanish Mountains, so let’s strip it back some more.

The roots of religion get closer to nature in Paganism - pre dating the church, so I put Gandhi in the trees 🌲 along with Zeus - to represent the Green Man and The Pope more in the man made Rome, however he is a reflection of The Man in the Moon too. Jupiter. The Roman Equivalent of Zeus - the Taurean all father God.

The Moon I saw The High Priest in was Taurus, HUGE just like Jupiter, as the Moon is exhalted in Taurus

Leonaro’s Virtuvian Man is 5 pointed - just like The earthy pentacle and to represent the 5th element of spirit. I went for one with the caduceus binding man because it seems the channels of man for spirit constrict.

“God is just too big to fit into one religion”

Things are changing. Stay true to you, be strong, silent, dignified, up your spiritual practice and meditation.

If you can’t get to Italy join us for International Intuitives Raising Awareness instead? I am seeing just how important this event is this New Moon in Taurus. Join us to plant a new seed in your world: click here 🙏💗

Got number 3? You got The Empress. Time to nurture and heal the Mother Wound

It's time you paid a lil visit to your inner child within a visit.

The queen has her Sun ☀️ on the cusp of Aries ♈️ (leader) and Taurus ♉️ (Earth mother) both are headstrong, but the Taurus/Earth-mother will take her impetus fire and give her that quiet, steely grace and strength we have undeniably seen in her in what seems to be a relentless ongoing one after another challenge, especially lately.

The Pomegranate from The High Priestess is now ripe, mature and here’s where we see the graceful strength come through ... the “pomegranate” doesn’t fall far from the tree 🌳

Perhaps a measure of the same decorum would be your saving grace in a situation right now?

I might not have an invite to the Queen's favourite place, Balmoral and the Scottish Highlands where those rolling hills are so Empress.

Or even Buckingham Palace for you but I do have an invite to help you heal your mother wound, it’s here...

Join us for International Intuitives Raising Awareness !! I am seeing just how important this event is this New Moon in Taurus. Will you join us to come from the heartfelt warrior rather than the hurtful one? Then click here 🙏💗