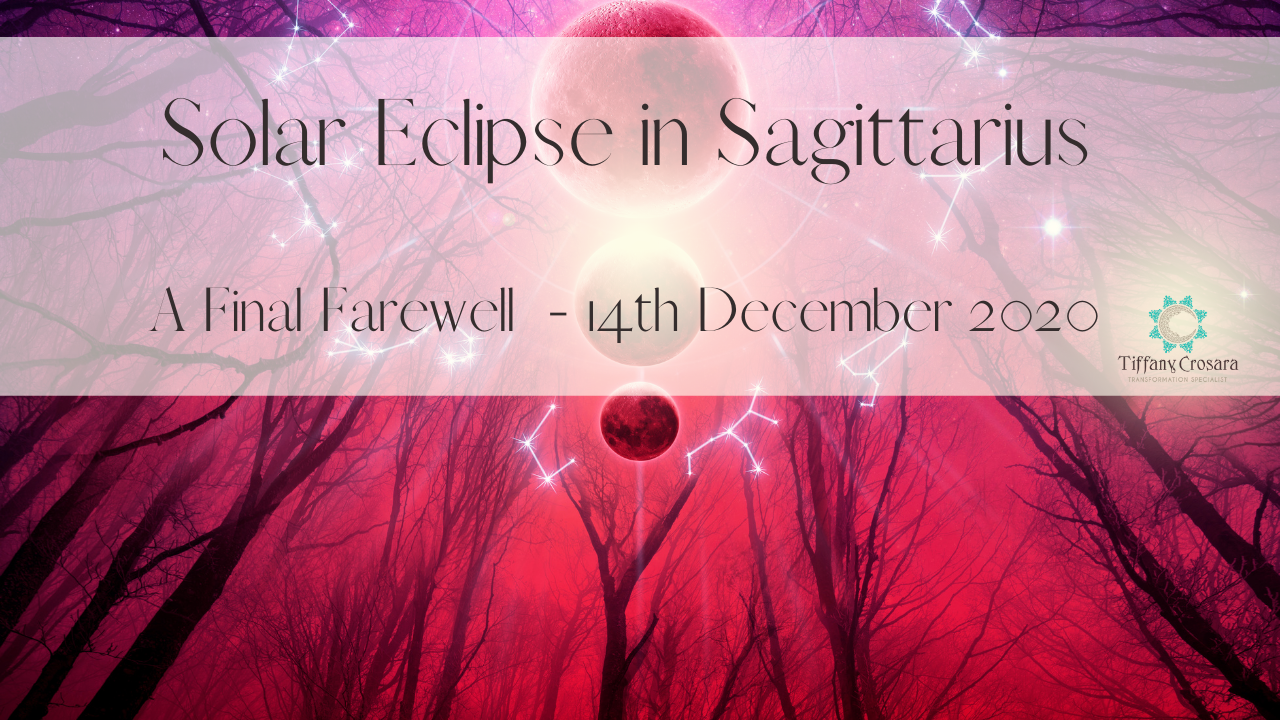 The old Chinese curse “May you live in interesting times” has literally flown at us this Emperor year (2020 adds up to 4 in numerology, the 4th card of the Tarot is The Emperor).

On New Year's day this year, I channelled a message from The Emperor which said if we didn’t take personal responsibility we would have a karmic whack.

I knew The Emperor would kick arse but I had no idea of what was coming.

And when it came I thought oh well The Emperor culls quickly before it rebirths the New world, I reckon we will see death up until June and then creation after that!

What words do you associate with the Emperor?

We have seen The Emperor in action a lot lately, the threat of attack has been so immense that it’s important to make sure we don’t get caught up in pointing the finger at ourselves or eachother.

Who really knows the truth? And even if we do, who really understands WHY it happened?

“Remember that all through history, there have been tyrants and murderers, and for a time, they seem invincible. But in the end, they always fall. Always.” - Gandhi

Do we want to live in times of attack and blame, or non judgment and compassion?

May you live in interesting times is known as a Chinese Curse, and this is what wikipedia has to say about that…

“Despite being widely attributed as a Chinese curse, there is no known equivalent expression in Chinese”

Yet the level of blame towards China for Corona has led to attacks on innocent Chinese people.

Maybe it’s not. And even if it is you can’t address a problem in the same way it started...

Go higher, leave it up to the higher, get out of the way of the higher.

All we can do is be the change we wish to see.

We have seen stark examples of how this works with social distancing and masks the viral impact it has on the world if we break it - and at the same time it’s important not to judge.

There is no one set of circumstances for us all.

We now live in a world that is trying to function in the way it knew before lockdown, but the gears are crunching.

How many times have you left the house without your mask, only to go oh ffs! And need to go back again?

How many times have you been looked at or treated as if you were a serial killer from those who are being the change they wish to see - but unable to leave it there?

My step daughter is a key worker in a supermarket, and it’s not part of the policy for their staff to wear gloves when they stack the shelves. A member of the public had a go at her about this.

A prime example of how you can’t address the problem at the level of the problem...

The need to take it higher... and take personal responsibility.

Even with gloves it’s not foolproof. The only way the lady could have safety would be to anti bac everything when she got home.

The threads of a new society are being intricately woven and the new and somewhat complex picture will take time to form.

Taking time and non attack are the two threads I wish to focus on to weave the picture of this New Moon in Leo because of the incredible picture it is forming in the sky.

The power lies is in the finger of God (Yod) Here it is: 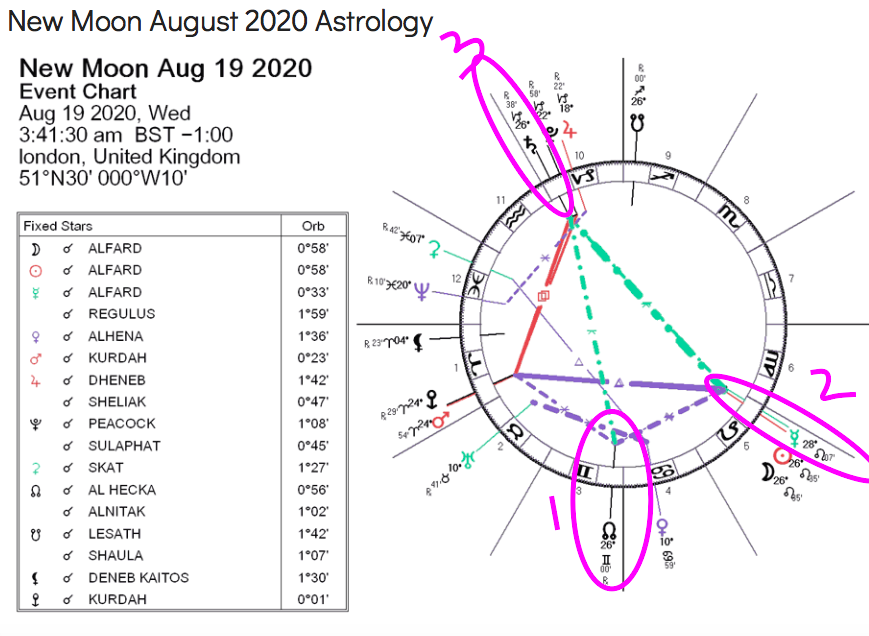 Meaning right thought and speech is crucial in the creation of a new world, if we are to evolve into a new system which does not need to enforce restriction.

The interesting thing is everything is in its RIGHT place e.g Gemini, Leo and Capricorn are all in “lockdown” in their own houses, and naturally through personal responsibility capitalising on their own strengths.

Trying to make things right at the lower level, the futile battle.

As I always say, as in the macro is as so on the micro… So how is this playing out in your life?

The most interesting explanation I have seen for how it is playing out in the micro has to be on Jamie Partridge’s website aka The Astrology King.

In it he speaks of this pattern: 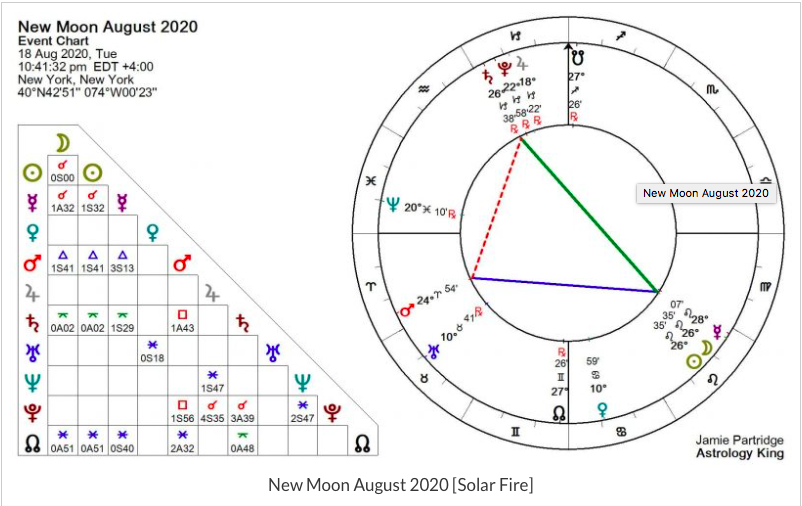 A pattern of working things out - this one is retrograde, so we do need to allow a little more time than what we previously thought - perhaps the whole year, rather than what I naively thought might take half!

The red line is a square aspect forming between Mars (The ruler of The Emperor/ war/attack/ action) in his native house of Aries forming a square - tense aspect also to Saturn in Capricorn (the heaviness in society) in the macro and in the mirco shows a regular and drastic experience of conflict due to feelings of inadequacy because of a certain problem.

The green line is a quincunx (karmic) aspect where the problem is dealt with. Here we see Mercury quincunx Saturn, if we can change the way we view limitations in our personal lives and in the world at large, get our thoughts and words right, the world we build will be one of great maturity.

The blue line is a trine aspect showing the desired state of harmony. Here we have Mars in trine (harmony) with Mercury.

Mercury is a natural meditator - The Magician in the Tarot and we all know the 3 stages of magic are thought, word (Mercury) and deed (Mars).

Here we have that in action.

It’s time to get your thoughts, words and deeds right in whatever area your crisis is in right now, and create your world anew.

We are all going through major upheavals in our personal world and the world at large.

Our careers, our relationships and our place in society are all rumbling.

Be kind, because we never really can see what’s happening in the bigger picture.

It’s only you that knows your world, what’s best for you, and what is for you to do.

In my world I have the story of two Emperors playing out. One is my grandfather - who has also been a father. The other is my Father in Law.

Both of which are loyal, caring family men - in entirely different ways. Both of which have their life hanging by a thread currently.

My grandfather is 98, still at home with my 91 year old Gran and being looked after by the family. This care has continued through lockdown despite the warnings to self- isolate - we took the view that was more important for their connection with the family to continue (they are offline and can’t use the phone well) - we just didn’t hug them.

My grandad never complains, never gives a problem his focus, he only entertains thoughts and words of love, compassion and peace.

A fortnight ago Grandad got diagnosed with the final stages of Kidney failure.

Now the no hugging rule has gone right out of the window and his last days are full of love, care, personal presence and hugs, which he is feeling eternally grateful for - but then again he will always count his blessings -it’s just the way he is...

In comparison my 78 year old Father in Law lost his wife just before lockdown hit and went into complete self - isolation. The combination of lockdown, grief and a mindset dominated by fear and the need to conform is culminating in a breakdown of mind, emotion, spirit and body.

He is in immense suffering that we cannot help him with as he keeps the glass wall of the facetime screen up and intensifies each day behind it, It’s so incredibly hard to witness the polarity - I wish I could show him what I see, but the truth is…

Everyone is doing their best from their level of consciousness.

All we can do is give what we would like to receive in these circumstances - love.

So what is the resounding roar from the passionate heart of Leo this New Moon?

We are all going through imminent rites of passage and here are 3 ways I can help you with yours:

Yes, patience will serve us all well in these imminent rites of passage and interesting times!

Much love roaring towards you from one of your fave Leo’s!