Your Inner Lion Knows How to Focus and Attain, or - Try Again 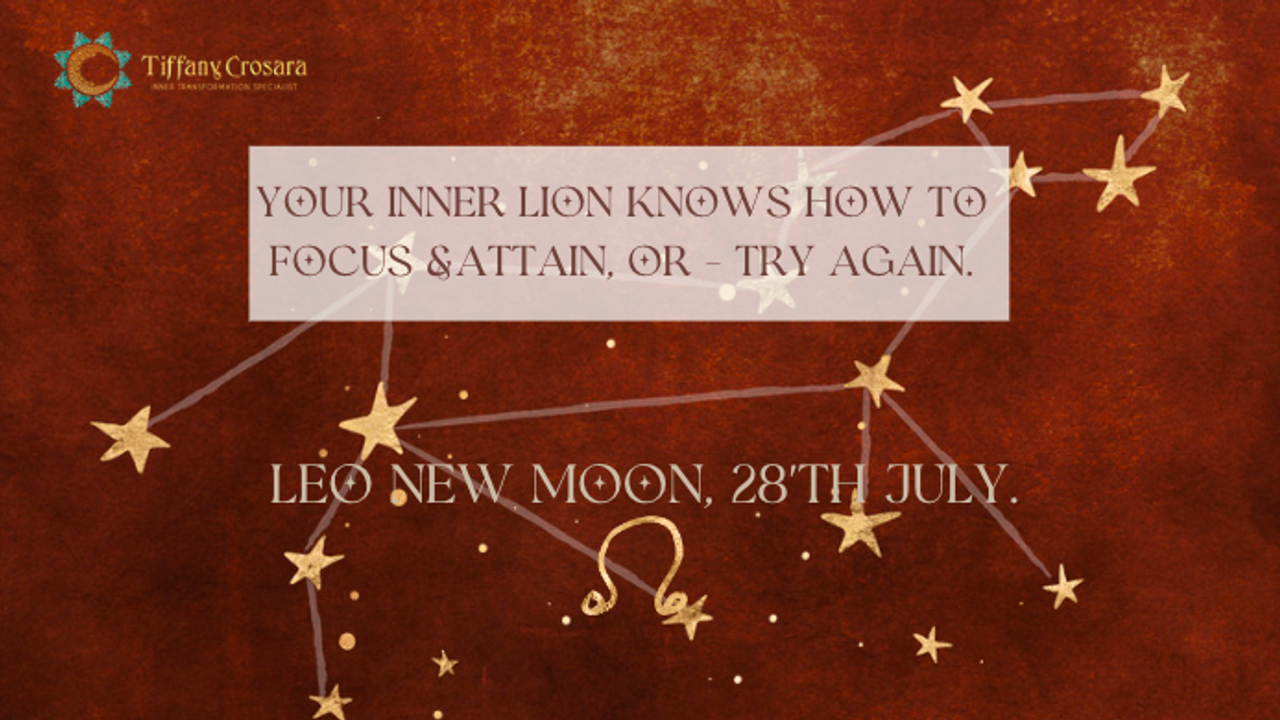 The Leonine New Moon pounces upon us at 6:54 pm BST on 28th July this year, in true theatrical Leo style.

Leo is powerful enough in its own right, let alone the universal entourage it’s arriving with, so here, in this blog, this lil Leo is setting out to remind you…

Your inner Lion knows how to focus and attain or - try again. His soul's escaping through this hole that is gaping

This world is mine for the taking

Make me King, as we move toward a New World Order

A normal life is borin', but super stardom's close to post mortem

He blows, it's all over,

Snap back to reality, ope there goes gravity

Ope, there goes rabbit, he choked

He's so mad, but he won't give up that easy? No

He won't have it, he knows his whole back's to these ropes

It don't matter, he's dope, he knows that, but he's broke

I was playin' in the beginnin', the mood all changed

I been chewed up and spit out and booed off stage

But I kept rhymin' and stepped right in the next cypher

Back to the lab again, yo, this whole rhapsody

Better go capture this moment and hope it don't pass him

You better lose yourself in the music, the moment

You own it, you better never let it go

You only get one shot, do not miss your chance to blow

This opportunity comes once in a lifetime

The once-in-a-lifetime opportunity here is…

The two futuristic energies of Uranus (awakener) conjunct the North Node (destiny) aligning - and Mars (action) joining in with this year's Leo New Moon - it’s an alignment that’s never happened before in our lifetime.

So how this will play out is a complete mystery, but…

The degree of the meeting is 18 degrees of Taurus - the Sabian symbol of "a new continent rising out of the ocean." With Jupiter turning retrograde, too, your deep inner nature is set to reveal something new to you.

It's not something you can plan… …It's super-natural and instinctual.

The party going on in Taurus waves a red flag to a (red) bull, and with the Sun and Moon in Leo, we are waving a rabbit in front of a Lion.

I've blown a lot of those once-in-a-lifetime moments, a Hay House deal, a winning Lotto ticket, a Prime Time TV slot. What can I say? I'm a Lion that misses the rabbit a lot!

But the real King of the Jungle Lion has no FOMO.

He sleeps between 16-20 hours each day. How many rabbits hop past them in that time?

Lions conserve their strength rather than spend it, devoting way more time to rest and play than the hunt, even though there's no borrowing a rabbit from the neighbour for tea or slapping it on a credit card.

If they don't hunt that day, the family goes hungry.

Yet, it doesn't bother them enough to hunt all hours that God sends. Why? Because as sure as the Sun follows the Moon, they know there's an abundance of rabbits.

So remember this… it's a busy, active, fiery, fast "harey" new moon, but the wise Lion conserves strength. There are many shooting stars throughout the Leo season due to the Perseid meteorite shower - climaxing around this year's full moon.  That tells me - and you, there are many rabbits/hares to catch.

We are blessed with abundance in August - the month of Lammas.

So my dears, I will leave you with one more lyric for this Leo New Moon, my favourite poem of all time, that I’d love read at my funeral or emblazoned on my tombstone…

To be so strong that nothing

can disturb your peace of mind.

To talk health, happiness, and prosperity

to every person you meet.

To make all your friends feel

that there is something in them

To look at the sunny side of everything

and make your optimism come true.

To think only the best, to work only for the best,

and to expect only the best.

To be just as enthusiastic about the success of others

as you are about your own.

To forget the mistakes of the past

and press on to the greater achievements of the future.

To wear a cheerful countenance at all times

and give every living creature you meet a smile.

To give so much time to the improvement of yourself

that you have no time to criticize others.

To be too large for worry, too noble for anger, too strong for fear,

and too happy to permit the presence of trouble.

To think well of yourself and to proclaim this fact to the world,

not in loud words but great deeds.

so long as you are true to the best that is in you.”

― Christian D. Larson, Your Forces and How to Use Them This is the energy of Leo, which is why it is The Strength card in the Tarot.

Speaking of which, my birthday is on the Full Moon this month, and I’ve been feeling the rebirthing all month -  I reckon you can too?

It’s like we’ve been on a massive crest of change since December, and it’s taking a very long time to get there, and although we aren’t there yet, there’s a definite cross-over.

To celebrate, I'd love you to join my Manifest a Miracle a Month circle for free this month.

Whether you are a past or future member, you are welcome. Focus & attain - or try again.

Before I dive into how, I want to express gratitude to the present members.

I’ve resisted doing a free month because it feels unfair to the paying members, without whom there would be no circle at all.

So I spoke to them and let them know that if they join a friend, I will gift them their friend's first payment, that way, everyone can have a free month.

Now I can gift this to you without feeling bad :)

People usually need to see what I do before they get it, and it’s pretty unique, so I get it!

And here's what you’ll be doing:

11th August - 7:30 pm BST - TIFF's birthday AstroTarotDance… Do you love ecstatic dance? Then you are invited to my 45th birthday party with me on the divine decks. Get ready to be transported into the heights of the Pleiadian meteorite shower of heavenly bliss and beyond!

12th August - 23rd August - Be The Change You Wish To See… Have you always wanted to learn Tarot? Now’s your time! We start with The Fool the day after the Aquarius “FOOL” Moon.

I look forward to the joy of connection or reconnection with you in this beautiful, powerful month of rebirth. P.S.) Fancy spending the Winter Solstice on a Transformational Truth of Tarot stone circle retreat in Cornwall? Book here before the 18th of August to spread the cost over five months.